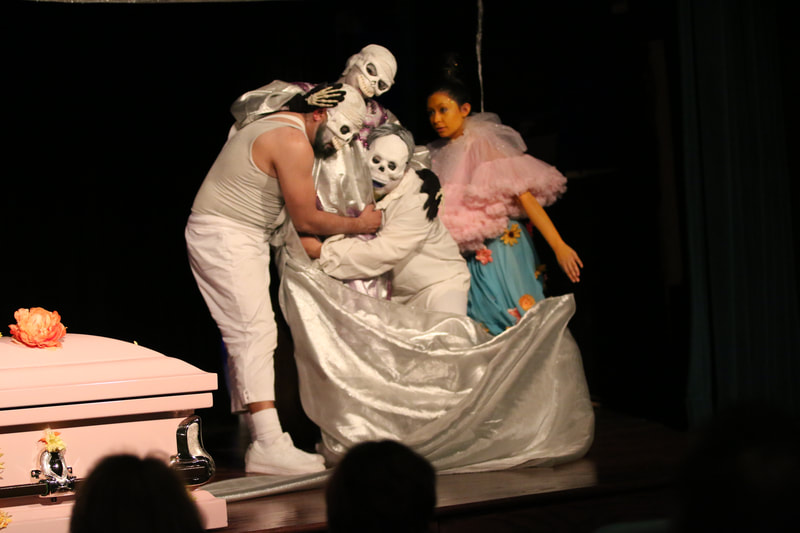 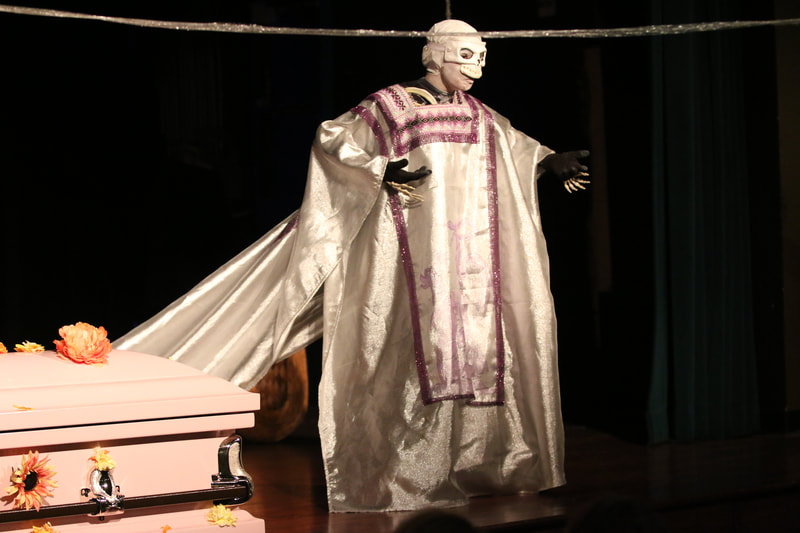 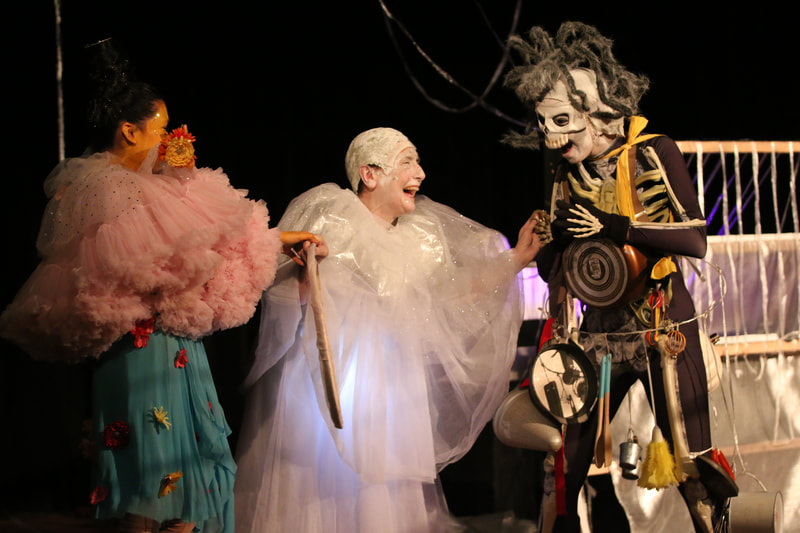 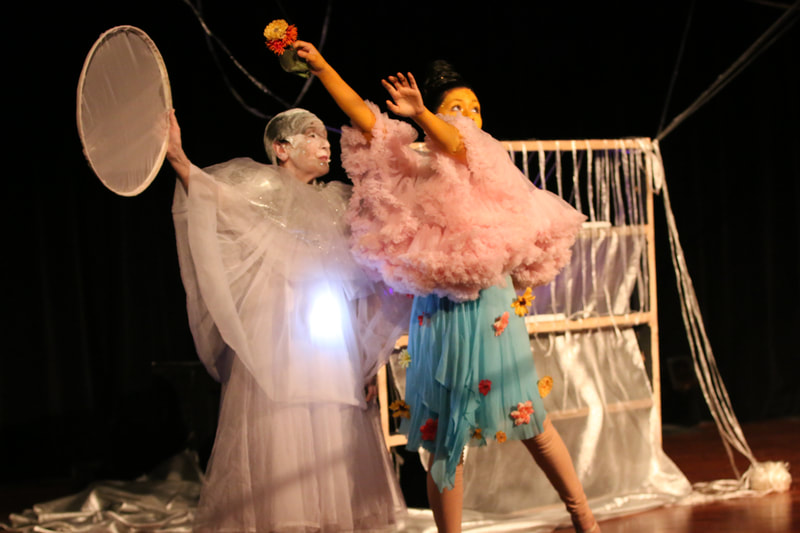 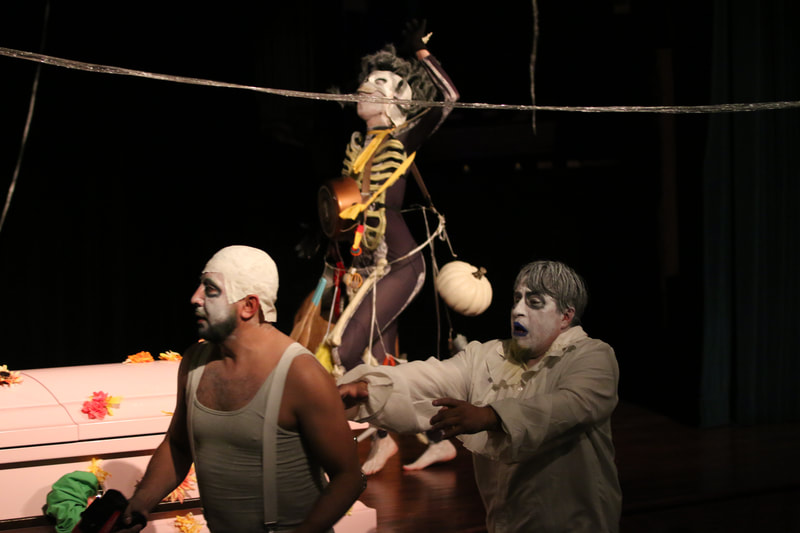 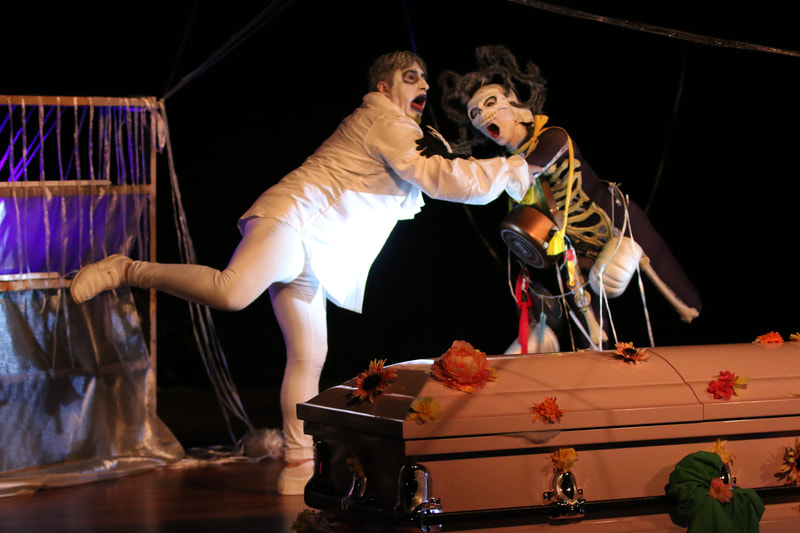 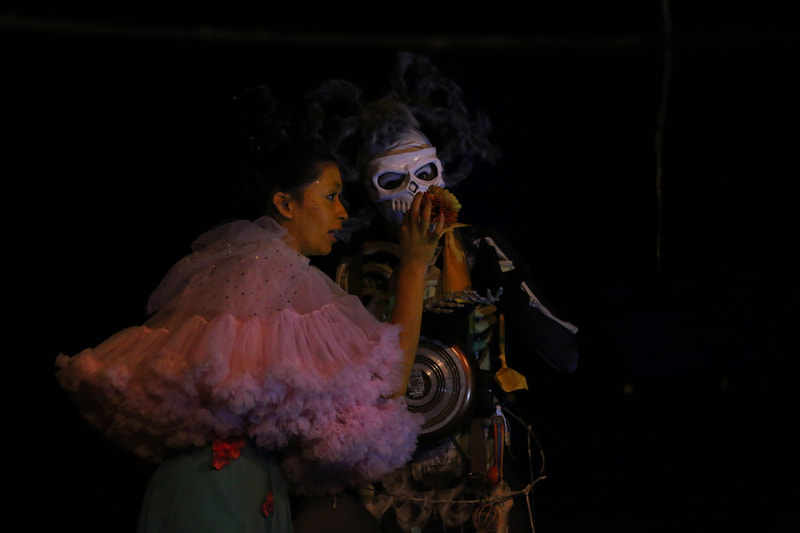 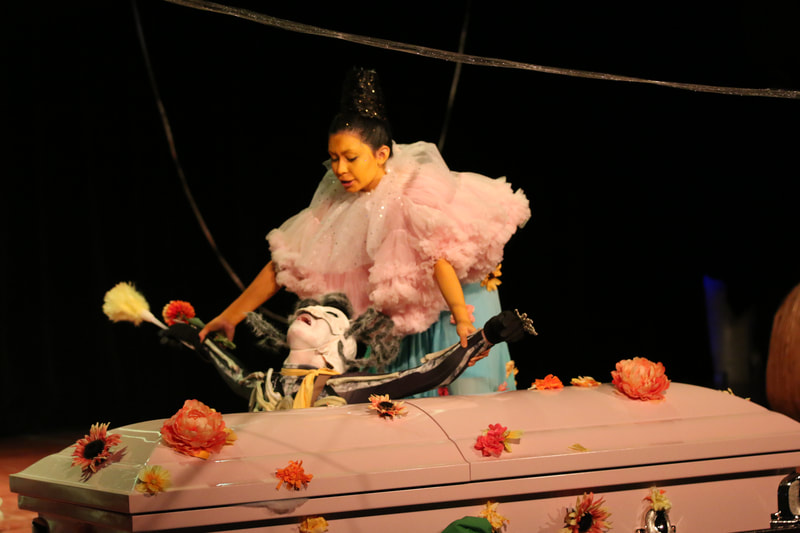 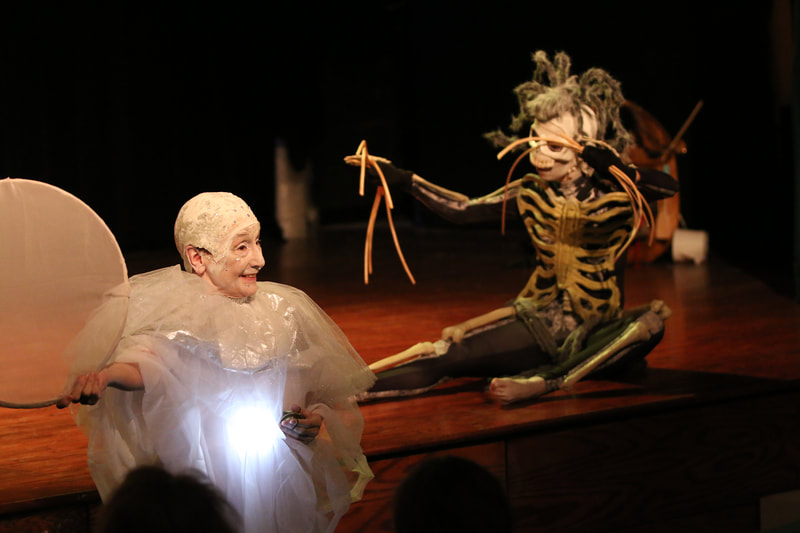 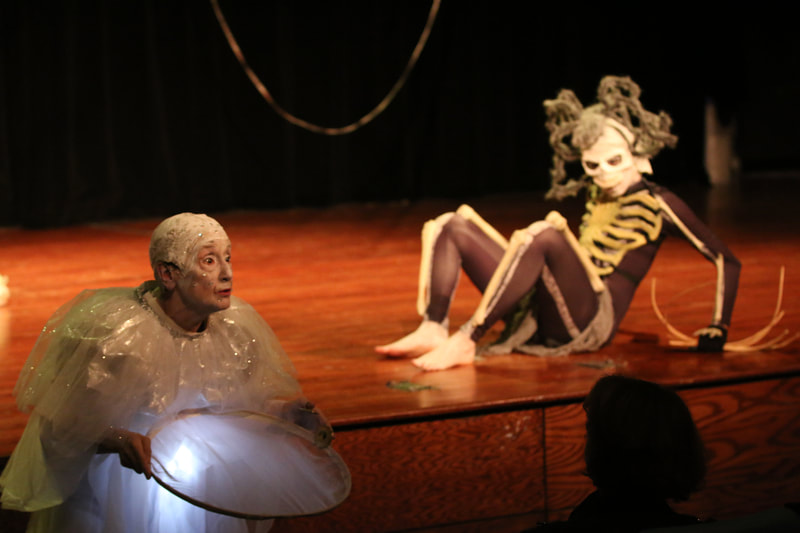 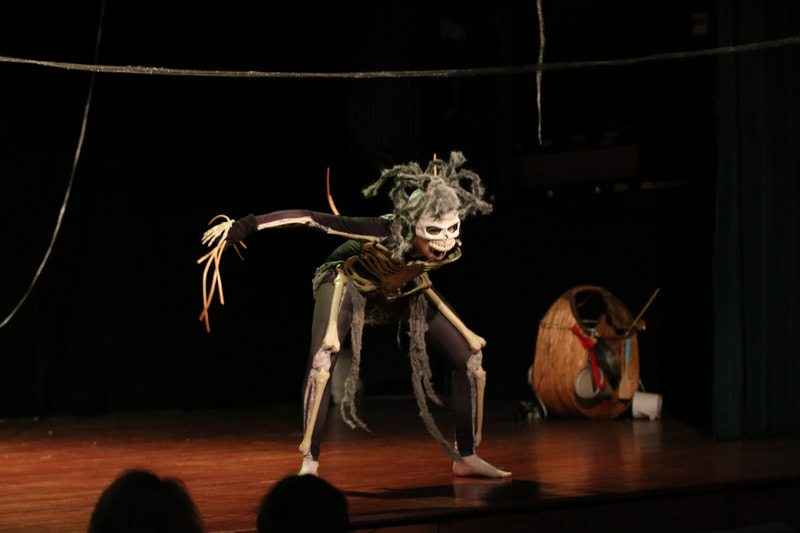 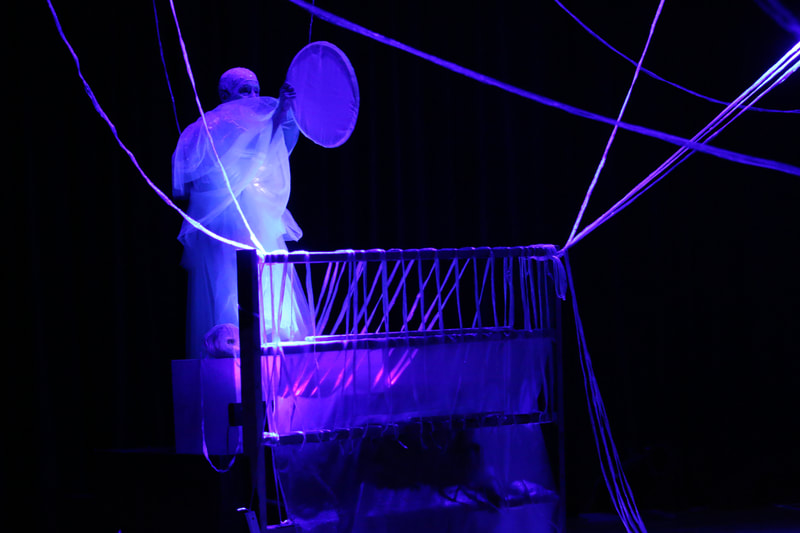 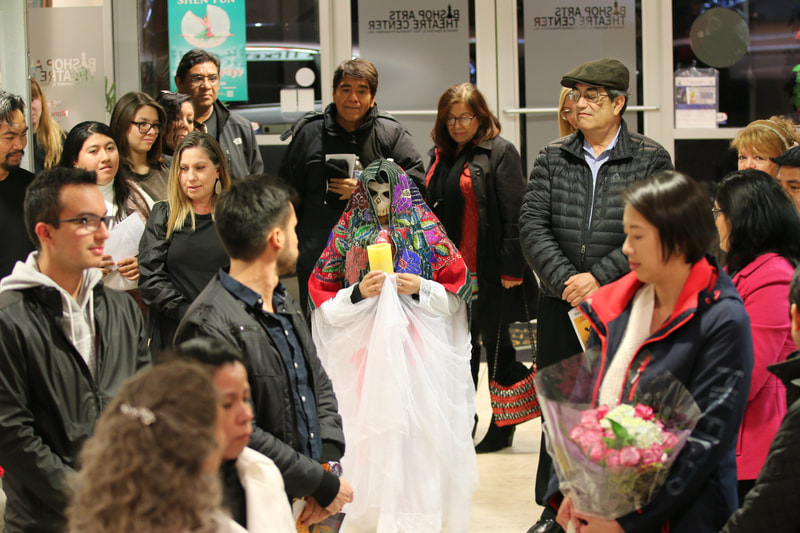 Dress Her UpTeatro Flor Candela's bilingual adaptation of A Dress for Lonely Death was a delightful show for all ages.
by Frank Garrett
published Monday, November 11, 2019

Photo: Teatro Flor Candela
The poster for A Dress for Lonely DeathDallas — It seems that with Disney’s 2017 film Coco, the slow northward creep of central Mexico’s ancient pre-Columbian festival Día de Muertos has accelerated all the more. Thanks also in part to Teatro Dallas’ long-running annual holiday productions, for the past few years Dallas has been able to boast various Day of the Dead celebrations. No less than three of the city’s cultural centers (the Bath House, Oak Cliff, and the Latino Cultural Centers) hosted exhibitions and events this year, which came to a climax in Dallas sponsoring a successful first annual parade and festival.
Building on this cultural legacy is Teatro Flor Candela’s production of A Dress for Lonely Death/Un vestido para la muerte sola, a bilingual Day of the Dead production that took place Nov. 1-2 at the Bishop Arts Theatre Center. Director Patricia Urbina adapted the play from the 2013 children’s book Un huipil para la muerte by Mexican illustrator Esmeralda Ríos. The show was produced by Teresa Coleman Wash.
The festivities began even before entering the theater. After welcoming the audience to the show, our hosts ushered in Death herself, wrapped in a dark shawl so that only a skeletal mask was visible. Death sang the classic folk song “La llorona,” and some of those gathered joined in. Afterwards, we were invited to follow our mysterious guide into the darkened auditorium lit by dozens of votive lights, each representing the soul of someone who has died.
As the story unfolds, we learn that Death, played by Diana Gómez, is lonely. Everyone, even the animals, avoids her. She thinks if only she had a more beautiful dress, then people would want to be her friends. Her first attempt at fashion is a makeshift hoop skirt with dangling white pumpkins and tea kettles that clang and clatter when she moves. Death ends up becoming a noisier, more frightening version of herself, which brings her more grief.
But a brave girl named Rosita, played by Rosa Garcia, befriends lonely Death. Because Rosita had met Death earlier when she had come to take her abuelo, Rosita doesn’t fear Death like other humans do. The girl takes it upon herself to help out Death by weaving, with the assistance of Carmela Lamberti as the Moon, an exquisite huipil, a traditional dress worn by indigenous women of central Mexico. Death’s new huipil, however, has elegant beadwork replacing the standard embroidery. The Moon’s contribution to the new dress is weaving the stars right into the fabric itself. This magnificent dress becomes the bright light that the dying see upon first crossing the boundary between life and death, a light that welcomes them so that they do not fear Death.
Fleshing out the cast is Maria Cabeza as Timonia, Ana López as el Pato, a duck, and David Ortiz and Jay Martinez as the comic quasi-mime duo Kevin and Justin. Ortiz also plays Rosita’s abuelo in one brief scene.
Lizeth Garcia’s costume design stands out for its creative use of low-tech objects that are transformed into wondrous outfits that are equal parts fun and shocking. The masks are exceptional, and rarely did they interfere with the delivery of lines.
Sid D’Mello and Donald Frishmann served as the show’s technicians and production assistants, ensuring that the many sound and lighting cues went off without a hitch. The projection of images and video on the north wall of the theater made this show a mixed-media feast of the senses.
The production had a continual rhythm at play throughout the performance. There was, first of all, the interactions between the living and the dead, between the human characters and Death herself. Another dynamic was between the play’s actors and the audience. With performers planted in the house seats and some audience participation, it was sometimes difficult to be sure whether what was happening was scripted or not. But the audience was invited to make the connection that ultimately there is no separation between the two worlds, whether between life and death or between actor and audience.
Teatro Flor Candela’s A Dress for Lonely Death is a fun, magical tale appropriate for children and adults. Because every line is delivered in both Spanish and in English, the production is easily understandable for Spanish-only or English-only audiences. With a running time of just under an hour, it was a perfectly festive, carnivalesque celebration about matters of life and death.